In the spring of 2012 before the Olympics in London Belinda Trussell’s Anton was injured and out in a paddock with little hope of ever returning to competition. Fast forward four years and he and Belinda are on their way to Rio. Anton has gone from ‘broken’ to ‘better than ever’. 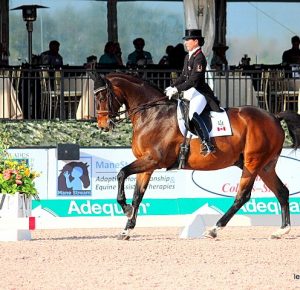 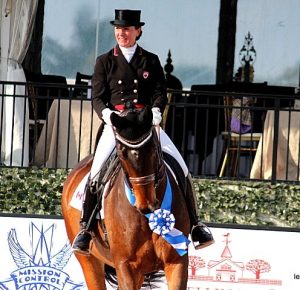 After a very successful season in Florida Belinda was on top of the Canadian leaderboard. At the CDI in Ottawa May 19-22 Belinda broke the Canadian record score for the Grand Prix with a 73.78. “I felt it was my best Grand Prix ever,” Belinda told me. They followed that up with another win and 74.882 in the Grand Prix Special. Her (unofficial) leaderboard average score is now 74.472. There will not be an official announcement until the beginning of July but Belinda and Anton are way out in front with that average.

I asked her what she thought had contributed to Anton’s remarkable recovery, not just to back where he had been but now better than ever. “His age. He is now 16 and he is a super-hot horse and with age he is now more rideable and very confident in his job.” She also attributes her own mental attitude as an important factor. “I never give up on improving. We’ve been doing the GP for 7 years and I never stop thinking that we can improve.” Belinda also believes Anton loves to compete. “When we got to Ottawa he was as high as a kite. He was Woo Hoo! We’re at a horse show!”
“He is very happy.” Belinda smiles as she says this. “He loves to compete and he runs onto the horse trailer when he’s going to a show.” After the Ottawa show he will have some down time. This does not mean he will just be chillin’ in his paddock. He will be turned out as usual in his nice large grass paddock and also will get acupuncture and chiropractic treatments from his vet Usha Knabe. Belinda will take him on hacks through the forest and do gymnastic work in the arena. I asked Belinda what’s involved in the gymnastic work. “Lots of long and low, leg yield, trot and canter transitions, canter 10 m circles to walk, drop the frame, then bring it up, then drop it again. I also do poles in walk and trot and I ride a lot in the snaffle bridle.” 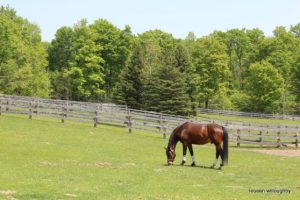 Anton relaxing in his paddock

Closer to Rio they will do another show. “I will want to test that we are in ‘top form’ and there are a few things that I think I can tweak for more points.”
In the meantime Christine Peters, the manager of Dressage in Equestrian Canada, will be busy with the enormous amount of work involved in getting horses and riders to Rio. Canada did not qualify to send a team only two individuals. But this has not made the organization of getting the horses to Rio any easier. In fact it has complicated matters. The two Canadian horses will fly out of JFK in New York on August 3 along with the Venezuelan jumper team horses. They will have to remain in Rio after the dressage competition ends until August 21st when the jumpers will be finished. Christine Peters is also working with the Canadian Food Inspection Agency (yes, that is the government department that deals with animal quarantine) to see if they can work around Brazil’s requirement that the horses do a 15 day quarantine in the USA. The Canadians are hoping that Brazil will accept a proposal to have the horses travel in a sealed van and just do 24 hours quarantine before boarding the plane. It’s not like humans. Horses can’t just turn up at the airport and take a seat.

While Belinda will need some vaccinations to go to Brazil Anton does not need anything that is not already required by his FEI passport other than getting a micro chip. Christine looks after the horse and rider and support team arrangements while Belinda has to organize for her parents, her husband and her sister to come and see her ride in Rio. She also has to make arrangements for her two children Matthew and Sophie who will be remaining in Canada and for her business (her barn, students and other horses).

What will Anton have to eat when he’s in Rio? A list of his feed had to be sent to Brazil and approved. All of the bags of feed for the entire stay must be sent with him unopened. All of his supplements must also be sealed. And what about the hay?

The hay is being shipped in from Idaho! Yes! And I thought Idaho was only famous for potatoes!

Just before the flight Belinda will back off a bit on Anton’s work. She wants him to be fresh for the flight but not too fresh so he will continue to work up to his departure day.

I think that Anton’s story is one of the best comeback stories I know of. He sustained a very rare injury and the best veterinary specialists in both Canada and the US could not put him back together again. Four years ago during London 2012 he was out in the paddock. But Belinda kept on getting massage therapy treatments for him from equine massage therapist Paul Wood. One day Paul asked Belinda to just put on some tack and take him for a walk. Anton was depressed without a job Paul told her. Belinda tacked him up and he started his comeback. And what a comeback it has turned out to be. I believe this is a testament to Anton’s love of his work and competing and his relationship with Belinda. It is also a testament to Belinda’s love of her horse, her patience and her optimism.

I wish them both the very best of luck in Rio.