In the absence of any official information from Equine Canada (EC) on the Canadian Olympic dressage criteria, we have been keeping an updated (UNOFFICIAL) ranking list. 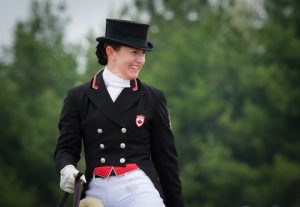 Belinda Trussell enjoyed another fantastic outing, achieving a personal best in the Grand Prix Speciale and overtaking Leah Wilkins to lead the standings.Chris von Martels who moved up one notch thanks to an improved Grand Prix score. This will be an interesting pair to watch as they are still extremely early in their partnership and there are still over 3 months left to attain qualifying scores.

Although the criteria is not public, what we do know is that it requires horse/rider combinations to submit:

So bear this in mind when looking at the scores accrued to date by these riders as a number are still working towards achieving all 4 scores.

Since Canada was not able to qualify a team for the Rio Olympics at the 2015 Pan American Games (that slot went to the USA), we did achieve an individual ticket thanks to Belinda Trussell & Anton‘s individual placing at the Pan Ams.

A second individual slot was achieved by Canada thanks to Megan Lane & Caravella‘s top placing in the FEI Group D & E on the FEI Olympic Athletes Ranking list. (see below).

The composite team has gone to Denmark as a result of their athlete’s top placings in the FEI Olympic Ranking List.

Who will Represent Canada in Rio?

Once the FEI formally notifies Equine Canada of their 2 individual spots, and EC confirms they will be filling these, all that is left now is for EC to identify who will be riding in Rio.

Hopefully this will be of help for you to keep track and cheer on your favourite horse/rider combination!

Declared riders who have not yet posted 2016 qualifying scores: 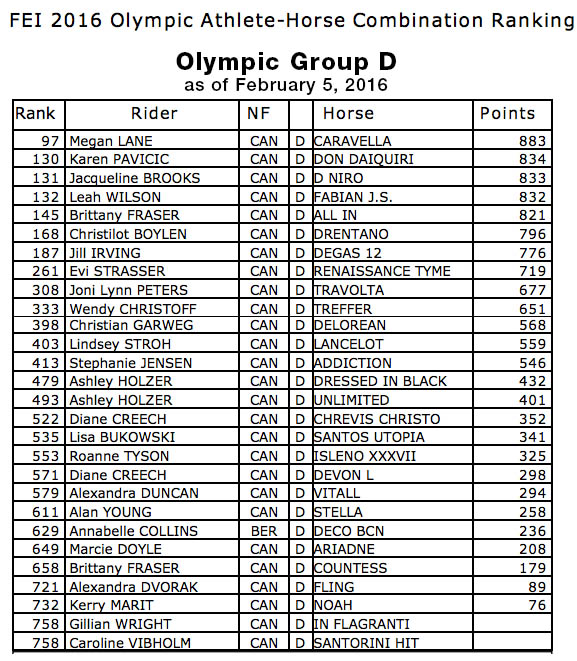