Born in Sydney, Australia, Belinda Trussell spent her childhood living in such diverse places as Indonesia, Singapore, Hong Kong, the Philippines and Atlanta, Georgia.  In 1987, Belinda’s family moved to Toronto, Canada, where she competed at the Young Riders level. She retained her Australian passport and represented her native country in all Young Riders competitions until 1994 when she became a Canadian citizen.

After completing her Bachelor of Arts Degree in Commerce from the University of Toronto in 1994, Belinda moved to Germany to train under the watchful eye of Canadian Dressage Icon, Christilot Boylen.   Belinda took her burgeoning talent to a new level.  When she returned to Canada, she was ready to compete on the international stage again, this time representing Canada in the Big Tour on her wonderful partner, Royan II. 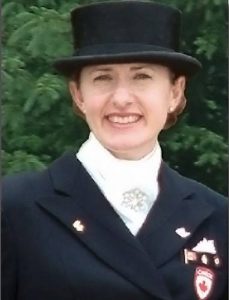 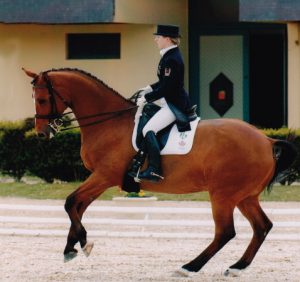 Royan II and the Olympics

Early in 2002, Belinda acquired the 12-year-old Oldenburg Grand Prix horse, Royan II (Karon x Welt As).  Within five months, she qualified to represent Canada as the youngest member of the Canadian Dressage Team at the 2002 World Equestrian Games in Jerez, Spain.

In 2003 Belinda and Royan represented Canada again, this time at the European Dressage Championships.

Her path to the 2004 Athens Games began to take shape as she rode at the World Cup in Duesseldorf, Germany, then earned a spot on the Canadian Olympic team.

Following the Olympics, Belinda acquired a 2000 dark bay Sachsen gelding named Anton (Antaeus x Melit) who was to play a large part in Belinda’s competition career though the path was not always straightforward.

Developing an instant connection, the pair moved up through the levels, winning ribbons, championships, and accolades from Saugerties through Devon and Blainville along their way to Grand Prix.

In 2010, Belinda and Anton had an incredible competition season in Wellington, Florida where they earned their first Grand Prix Special score over 70%.  Belinda was once again chosen as a Canadian Team member, this time for the 2010 World Equestrian Games.

In 2011, Anton suffered what was feared to be a career-ending injury.  It was a devastating blow for Belinda who had formed an amazing working relationship with him. After a year of various treatments and a long period of pasture rest for Anton with only modest recovery, Belinda had become very discouraged.  Paul Wood, his message therapist, recommended that she begin walking him under saddle to encourage him.  Then Dr. Usha Knabe  began a new approach to treat Anton’s discomfort. To Belinda’s joy and amazement, the treatments, herbs, and routine Dr. Knabe prescribed were successful and Anton returned to the competition ring in 2013.

They resumed where they had left off:  improving their scores through the winter season in Wellington and representing Team Canada at the World Equestrian Games in Caen where she finished in the top 25 individually.

In 2014, Belinda began competing at Small Tour with the Westphalian gelding, Tattoo, who promises to be her star for the future.

2015 found Belinda and Anton back in Wellington in the lead-up to the Pan Am Games.  Their scores through the season continued to rise, and they were selected as one of the two Big Tour pairs for the Canada 1 team.

At the Pan Ams, in a thrilling series of tests in front of the home team supporters at the Caledon Equestrian Centre, they produced their best scores ever: 73.44% in the Grand Prix, 75.07% in in the Special, and 76.80% in the Kur.  They not only took home the Team Silver medal, but earned Canada an individual slot for the Rio Olympics.

The Wellington winter campaign was stellar for Belinda and Anton.  They achieved breathtaking milestones including new personal best scores and first place finishes in the  GP and GPS in the Palm Beach Dressage Derby and AGDF 3.  They ended the season leading the Canadian Team to the Silver Medal in the Nations' Cup competition and earned the individual Bronze Medal on a score of 76.350%.

In April, 2016, Anton was awarded Dressage Horse of the Year at the Equine Canada annual meeting.

July saw Belinda and Anton officially nominated as one of the two individual riders earned by Canada for the Rio Olympics.  In the Grand Prix, Belinda and Anton earned a score of 72.214% to move forward to the Grand Prix Special in which they scored 75.529%.  Both scores set new Canadian records in Olympic dressage competition. 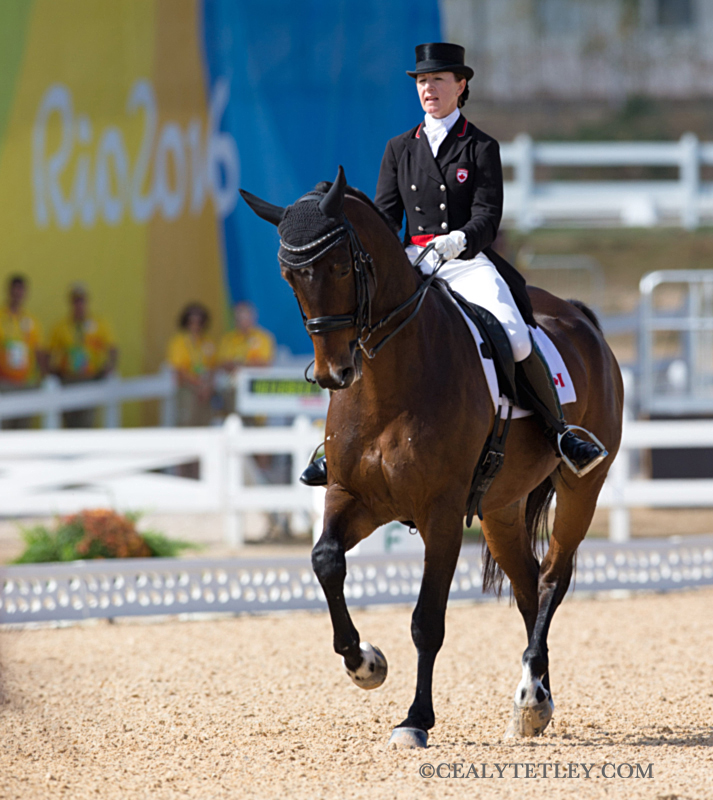 In February, 2017, Belinda announced that her beloved partner, Anton, would be retired from international competition and that he would begin an new collaboration with up-and-coming dressage rider, Abbey Simbrow.

Belinda had a dazzling Global Dressage Festival winter season with Tattoo, who is very early in his top level career, winning both GP and GPS classes with scores in the 70s.  In small tour, Carlucci achieved a high score award of 76% at Prix St. George.

On July 8, with a sold-out crowd at Centre Équestre du Boisé near Montreal, BTI launched the inaugural Belinda Trussell Saturday Symposium.  In the Clinic session, Belinda coached four local riders.   After an informal reception where those who attended got a chance to meet her, Belinda presented a Masterclass with two young horses in training, Feng de Lys and Beaujolais, plus her up-and-coming star, Tattoo, and finally her renowned Olympic partner, Anton.  The Symposium format was chosen because it allows Belinda to share not only her training system, but also her path of learning about each of her horses.  Audience members enjoyed moments of laughter, and shed a few tears too, as they got to understand Belinda's deep connection both with her sport and most of all with the horses.

Plans are underway for the next Saturday Symposium!  Please visit the Symposium page for photos and video of the first edition, and for announcements regarding coming dates.