Ottawa, ON – Belinda Trussell of Stouffville, ON and Anton danced their way to a Bronze Medal in the CDIO 3* Grand Prix Freestyle, held April 1 as the individual final in the Stillpoint Farm Nations’ Cup in Wellington, FL. 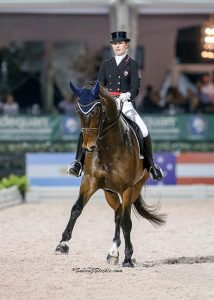 PHOTO – Belinda Trussell from Stouffville, ON and Anton danced onto the podium on April 1 in Wellington, FL, winning the Individual Bronze Medal in the 2016 Stillpoint Farm Nations’ Cup for their performance in the CDIO 3* Grand Prix Freestyle.

Marking the 12th and final week of the Adequan Global Dressage Festival (AGDF), the nations’ cup featured a two-day team competition on March 30-31 with top riders from around the world representing their country. Trussell led Canada to the Team Silver medal, before moving on to compete for individual honours.

Competing at night under the lights, Belinda and Anton (Antaeus x Melit), a 16-year-old Sachsen-Anhaltiner gelding owned by her mother, Robyn Eames, received a score of 76.350% from a panel of international FEI judges in the Grand Prix Freestyle, securing the individual bronze medal. Americans, Laura Graves and Kasey Perry-Glass won gold and silver, respectively.

“Anton was really spectacular, and I am so excited about the bronze place finish tonight,” commented Trussell, who has been no stranger to success during the AGDF series, racking up wins in the Grand Prix division, along with records for personal bests and even breaking a Canadian record for highest score in the Grand Prix Special. “It was a goal for me to be on the podium tonight. I am so proud to be Canadian and be part of that podium and represent Canada at a nations’ cup – one of the top events in the world.”

Also placing in the CDIO 3* Grand Prix Freestyle were Trussell’s nations’ cup teammates, Jacqueline Brooks from Cedar Valley, ON and Megan Lane from Loretto, ON.

Lane was right behind Brooks, placing seventh (69.375%) with her TORONTO 2015 Pan Am Games mount, Caravella  (Contango x Riverman), a 15-year-old Dutch Warmblood mare she owns with her mother, Cathy Lane.