Ottawa, ON – The Canadian Dressage Team captured the Team Silver Medal in the CDIO 3* Stillpoint Farm Nations’ Cup, stepping up to the podium on March 31, 2016. 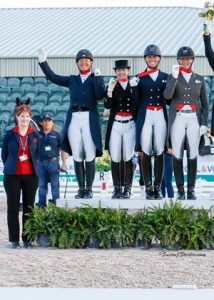 The nations’ cup is the feature event of the 12th and final week of the prestigious Adequan Global Dressage Festival (AGDF), running March 30 to April 2, and providing top riders from around the world with the chance to compete for their country in a team-based event.

Following day one of competition on March 30, Canada was holding second position on a team total score of 212.58 after the completion of the CDIO 3* Grand Prix. Team members, Jacqueline Brooks from Cedar Valley, ON, Megan Lane from Loretto, ON, Karen Pavicic from Surrey, BC, and Belinda Trussell from Stouffville, ON were able to hold on to their second place spot on day two after competing in the CDIO 3* Grand Prix Special, and bringing Canada’s final team total to 428.708. The United States earned the Gold Medal on a total score of 454.698, while Spain took Bronze (414.421).

Despite dealing with the added pressure of an untimely equipment failure, Trussell was the highest placed Canadian of the day, scoring 72.412% for fourth place aboard Anton (Antaeus x Melit), a 16-year-old Sachsen-Anhaltiner gelding owned by her mother, Robyn Eames.

“My teammates were amazing when my noseband broke six minutes before my start time,” explained Trussell, a Canadian Olympian who was also part of Canada’s Silver Medalist Team at the TORONTO 2015 Pan Am Games. “The grooms and riders grabbed nosebands from their own bridles to replace my broken one. It was amazing teamwork, and I made it in the ring on time.”

“Canada winning the silver medal among such a great group of countries and riders shows our depth and strength for the future,” continued Trussell, who has also been highly successful as an individual throughout the 2016 AGDF series, even breaking the Canadian record for the Grand Prix Special after scoring 75.529% with Anton during week eight. “It is an honour to be part of such a great team.”

Another of Canada’s 2015 Pan Am Silver Medalist duos, Lane and Caravella (Contango x Riverman), a 15-year-old Dutch Warmblood mare she owns with her mother, Cathy Lane, were next on the leaderboard, taking sixth place on a score of 69.667%.

“With Canada capturing the silver medal, it was an exciting end to this Florida season, and I couldn’t be more proud of my teammates and their horses,” explained Lane. “It’s like my groom says, it takes a team to make the dream. And, I really feel Canada has great support.”

Pavicic and her 2014 World Equestrian Games partner, Don Daiquiri (Don Cardinale x Rubinstein I), a 14-year-old Oldenburg gelding she co-owns with Jayne Essig, received a score of 69.529% for their performance, putting them in eighth place.

“Don Daiquiri was fantastic,” said Pavicic. “I feel it was our best Grand Prix Special performance so far, and we obtained another good qualifying score for the Rio Olympics. It was our first nations’ cup experience, and I really enjoyed being part of Team Canada once again. I am so grateful to everyone who made it possible for me to be on this incredible journey, thank you to all. Go Canada!”

“The Grand Prix Special was a season high for us,” stated Brooks, continuing, “The nations’ cup is a wonderful event, and I will head off to my future shows all the better for the experience. I’d also like to congratulate my teammates for their exceptional rides. I am definitely a proud Canadian today!”

The Canadian team was supported during the nations’ cup by Technical Advisor, Dr. Volker Moritz, and Chef d’Équipe, Christine Peters.

“We had a strong team of seasoned competitors and we are not surprised with what they have accomplished this week at the nations’ cup,” said Peters, who is also the Dressage Manager for Equine Canada. “It was a fantastic team to work with, including all our hardworking grooms (Giselle, Evelyn, Carol and Alison). We now look forward to Rio.”

No stranger to the AGDF nations’ cup podium, Team Canada earned Team Silver and Bronze in 2015, Team Silver in 2014, Team Bronze in 2013, and has picked up three individual medals since 2013.

The individual medals for 2016 will be decided on April 1 during the  Freestyle competition.